In the EU, a device is considered to be equivalent if and only if it fulfills all the requirements of technical, clinical, and biological equivalence. Of these, biological equivalence tends to be the most nuanced and can be a confusing topic for medical device manufacturers—especially since regulators in different global regions don’t always take the same approach. Chemical characterization, which tends to get ignored—but is now a requirement per MDR, Annex II, section 6.1(b)—can help make claiming biological equivalence more feasible when “similarities/differences” exist.

EU MDR and MDCG 2020-5 state that devices are biologically equivalent when they:

When devices are considered to be biologically equivalent, manufacturers can leverage existing clinical data from the equivalent device, but they must provide an assessment of risks associated with the similarities and differences between the two devices. Because of the potential to save time and resources via the equivalence route, manufacturers naturally want to establish equivalence whenever possible and appropriate. However, given the heightened requirements under the MDR, there remains much uncertainty about the acceptability of strategies for establishing equivalence, specifically biological equivalence.

To help address this uncertainty, RQM+ has published two white papers. The first covers the nuances of biological equivalence under EU MDR, including the basics of how to establish this equivalence and associated example scenarios. The second provides more detailed strategies for approaching biological equivalence through chemical characterization and toxicological assessment.

In cases of similarities or differences, the onus is on the manufacturer to determine the associated safety and performance risks of those items that are not identical (the differences) and any potential impact on the clinical data of the equivalent device. The probability of acceptance depends on the nature of the differences and the type of device and the impact of the same on the clinical data.

This approach was developed by Dr. Jaishankar Kutty, formerly of BSI, to help both notified bodies and manufacturers determine the acceptability of biological equivalence for specific scenarios under EU MDR, which is much more rigorous than MDD.

Manufacturers must identify the differences between similar devices, assess the clinical impact of those differences, and determine how to mitigate any potential risks associated with the differences. It’s important to remember that conducting and successfully passing the suite of biological endpoint-based biocompatibility testing per ISO 10993 may satisfy the requirements of biological safety evaluations, but this does not mean that the subject device is biologically equivalent to the device with which equivalence is being claimed (equivalent device). Recognizing this along with addressing all potential similarities and differences is the foundation for determining whether clinical data can be leveraged from the equivalent device to the subject device.

In the context of MDR, the goal of chemical characterization is to determine what chemicals might come out of the device (leachables) in typical usage and under aggressive conditions (extractables). Many manufacturers are familiar with this concept as E&L testing.

Chemical characterization is not only a necessity for establishing equivalence, but it also provides an important baseline that will help manufacturers save time and resources on future design changes. Chemical characterization may also be used to supplant certain types of biological endpoint-based testing, although this approach may not always apply to implantables.

The data obtained through quantifying and qualifying the chemicals that a patient might be exposed to when using the device feeds into the toxicological assessment, which is used to determine the potential risk to the patient if exposed to these chemicals.

Notified bodies need to see a clear rationale for equivalence when there are material differences. In addition to providing the results of these tests, your rationale should include the credentials of the toxicologist performing the work. The biggest challenge when determining biological equivalence is answering the question, “What does ‘the same’ mean?” This is especially challenging because materials that are essentially the same might have a different formulation or even a differing manufacturing process.

In short, devices don’t necessarily have to be identical, but they must be the same to the extent that they are not different. Only then does leveraging clinical data even come into the picture. It is up to manufacturers to provide a rationale for their determination that the safety and performance of the subject device are the same as that of the equivalent device, even if there are material differences. Notified bodies cannot consult with manufacturers in this process or provide guidance—they can only accept or reject your determination of equivalence. Without a sufficient rationale, the acceptance process will take longer and, if equivalence is not ultimately determined, clinical data on the subject device may be required.

Notified bodies may not be able to provide consultation, but that is exactly what the team at RQM+ is here to do. With former notified body leaders at the helm, we have unique insights into how to meet the expectations of reviewers. These two white papers are an example of the knowledge we bring to every project and the thought leadership we offer the industry. With RQM+ on your team, you get not only increased capacity for execution but also deep expertise for developing cost-effective strategies. From establishing biological equivalence to comprehensive EU MDR planning and execution, we’re here to help.

To learn more about biological equivalence and how chemical characterization and toxicological assessments can be used to help justify equivalence, download our free white paper. 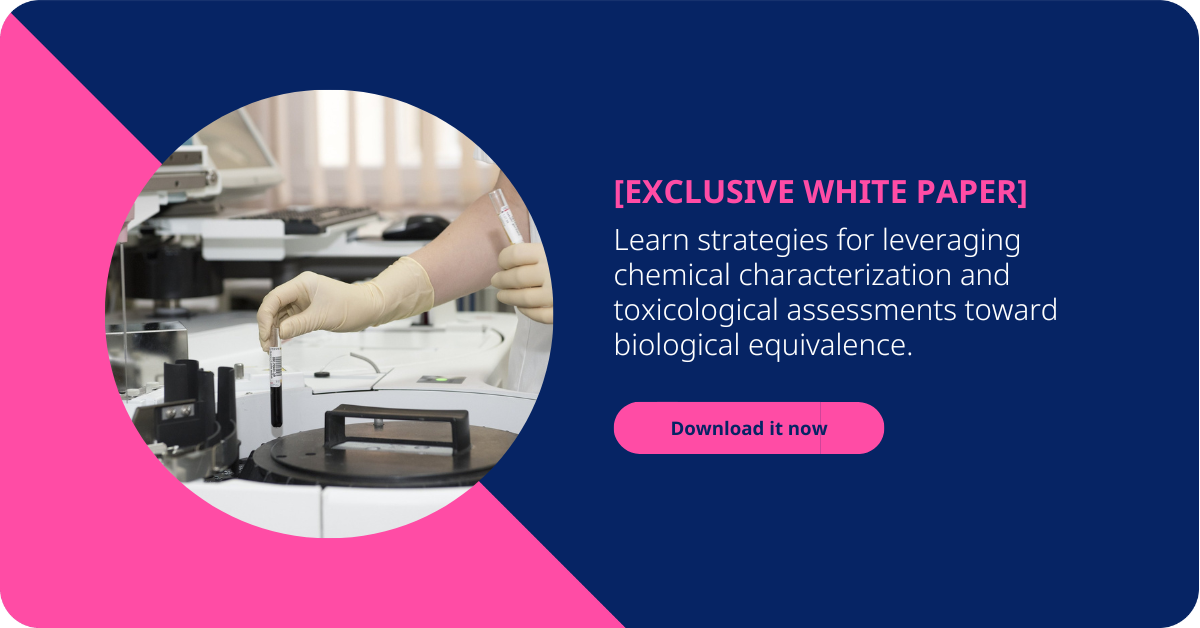